Your high expressionist and emotional behavior is that something which we can only came across during your live acts or it`s just part of your character which doesn`t vanish after the gig?

I can be very quiet in the real life, but some aspects as the arts, like minded people and interesting music instruments unlock something in me. I`m a shy person and I guess when I perform – I share many feelings, which I don’t show in the everyday life. The feeling is amazing and i`m so happy that I still get a natural kick out of the music and other art forms after so many years being a music fan and an artist later on.

If you have to compare Sofia to music scene across the Europe, where would you place it? Do you see any common trends or maybe there is something original which we can find only there?

Unfortunately I don’t have a good overview of the Bulgarian scene in the last couple of years, I travel every weekend and I am busy in the studio during the week. However, I was so often on the dancefloor from the mid 90`s till the mid 00`s. I have to say with nostalgy that we had something amazing going in the 90`s, it felt that every young guy or a girl listens to electronic music, it was something new for us, the people were enthusiastic and I`m a witness of amazing underground dance music events at that time. After the new millennium the electronic music here is not in its peak anymore, there are many reasons, but at least in my personal chart I would place Sofia quite low at the moment. However, I think here we have a great options to become the next capital of house and techno, the club / bar licenses are still pretty liberal, we are warm blooded people and we like to party so it`s just a matter of time till the things change in a positive way.

I found it very cool and innovative to encourage people to play music live with you together. Could you tell me which particular hardware they are triggering?

Before I started to produce and got into djing and playing live later on – I spent many years on the dancefloor. While dancing, I always wanted to be part of the magic, happening at the dj booth. Now playing live – I often remember of those moments and I am happy to offer anyone to be part of the magic, that happens in the dj booth. After a couple shows it became a tradition to make an acid track together with the audience. I use a Max4Live step sequencer that connects my Novation Launchpad controller with Audiorealism Bass Line (a software clone of t.b. 303, the classic acid-house synthesizer). I give the nicely looking Novation controller to the people, they touch some random buttons and that’s the way we get an acid bassline. However, if someone shows interest – I give access to my other devices as well. A weird ribbon controller that looks like a lazer sword, my little Akai controller with pads, triggering drum samples or an unique Italian analog box, called Leploop. It`s so much fun!

I believe you have impressive collection of hardware. Is there anything you want to keep forever? If yes, what make it so special?

It`s still not so impressive, compared to of some friend`s setups, but It grows all the time. I try to be practical when I buy stuff, so most of the machines I have are really useful. Maybe one of the very few machines I would get rid of at some point is the Roland t.r. 707. It`s an amazing rhythm box, especially for live jams, but right now i`m interested in more unusual devices. I`m a fan of the German brand MFB, they make nice analog synthesizers, sequencers and drummachines. They are affordable, but the sound quality and more important for me – the functionality is great. Easy to use, machines made to play, I have quite a few semi-modular MFB toys. But my latest two additions to the studio – a strange, unpredictable analog groove box, called Leploop and a freaky spring reverb – “Knas Moisturizer” are my favorites at the moment. I look for the new version of Leploop, also i`m considering putting together a little modular system, I really like some modern analog and digital modules by the company Make Noise. I guess the best synthesizer is the next i`m going to buy. I got into very addictive and expensive hobby.

I do always wonder what if you have to play two live acts in two days in a row for the same crowd. Is it possible to make the second one as interesting and unusual as the first one by using only your own tracks, loops, samples etc.?

Well, when I started to do the so called “live personal appearance” I was very dependent on the content I prepared at home and couldn’t change the music so much. I really struggled, as a dj originally, I used to have the freedom to change the sound any time, when I used to mix other people`s tracks. However, for about 3-4 years I managed to develop a simple, but efficient system, which allows me to compose on stage. Now I can easy play often for the same crowd, without reworking my set in advance. I also try to introduce some dj elements again, I bring few records with acapellas and locked grooves or some of my favorite tracks, so overall the set is very spontaneous. What I sacrifice is the sound quality, a hand played or triggered element cant sound as good as something, prepared in the studio. However, I took the risk and i`m happy to see amazing responses so far.

I like what you said in interview for RA. “I would sacrifice a good mix-down for a special sound.” Have you found a  tendency among young producer to make sound: fatter, bigger, richer, punchier etc. and forget about music itself?

Yes, absolutely. Couple of days ago I spoke to a young Bulgarian producer, he sends me his demos, which sound actually better than some of my released material, but the composition was still a  bit one dimensional and what was missing actually was the music, not the sound. His question again was if I can recommend some interesting equalization and compression techniques for his track. It`s a common problem, I`ve also been overproducing my tracks and i`m still learning how to concentrate on the main idea. I`m a painting artist by education, when we used to make a portrait in school – I used to start from the ear or the nose, a little detail. And then – build up the whole face around that. My teacher used to say – don’t start from the detail. Make a raw sketch of the whole thing and do the detail at the very end. The most important thing is the raw sketch. Now I think that’s valid for the music production as well. However, there is still hope, I find some very interesting new music, thankfully its not only nice sounding loops on the market.

What may create a barrier between idea of sound in your mind, creation of it and finally audible music?

I think in my case – the barriers can be: not having a good idea at all and not having enough time to produce what I have in mind. Sometimes certain techniques can be time consuming. But the biggest barrier is actually the lack of ideas. Now the technology is so accessible and highly developed, I believe everything is possible, as long as you can imagine it.

Is the creation process as much enjoyable as performing live?

Yes! Playing live or djing gives me very strong feeling, but creating new sounds and experimenting without any responsibility is priceless. I just like to hear strange noises and if I cant go that far on stage – I do it at home. I struggle when i`m away from the studio. In the club you need to think fast, at home you have all the time to enjoy the  sound and the look of your tools doesn’t matter is it a software or a hardware device. I love the process.

What is left to discover in music for you? Or what would like to try in music in near future?

I always wanted to be able to develop my own  music devices and now the fast computers and platforms as Max/Msp and Reaktor gives a good chance for that. However, it means I need to learn a lot and im not famous with my good memory, also i`m really busy at the moment. It might take ages till I start to learn such a software platform in dept, but that’s how I see myself in far future. And if we speak about music – last year or two i`m into the early electronica, modern classical music, musique concrete, obscure sounds from the late 50`s, early  60`s. I think this influence will be more notable in the stuff i`m planning to release later in 2013. But im always looking for inspiration in something new. Or old. 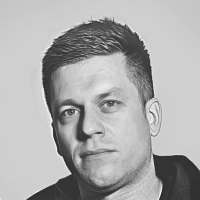